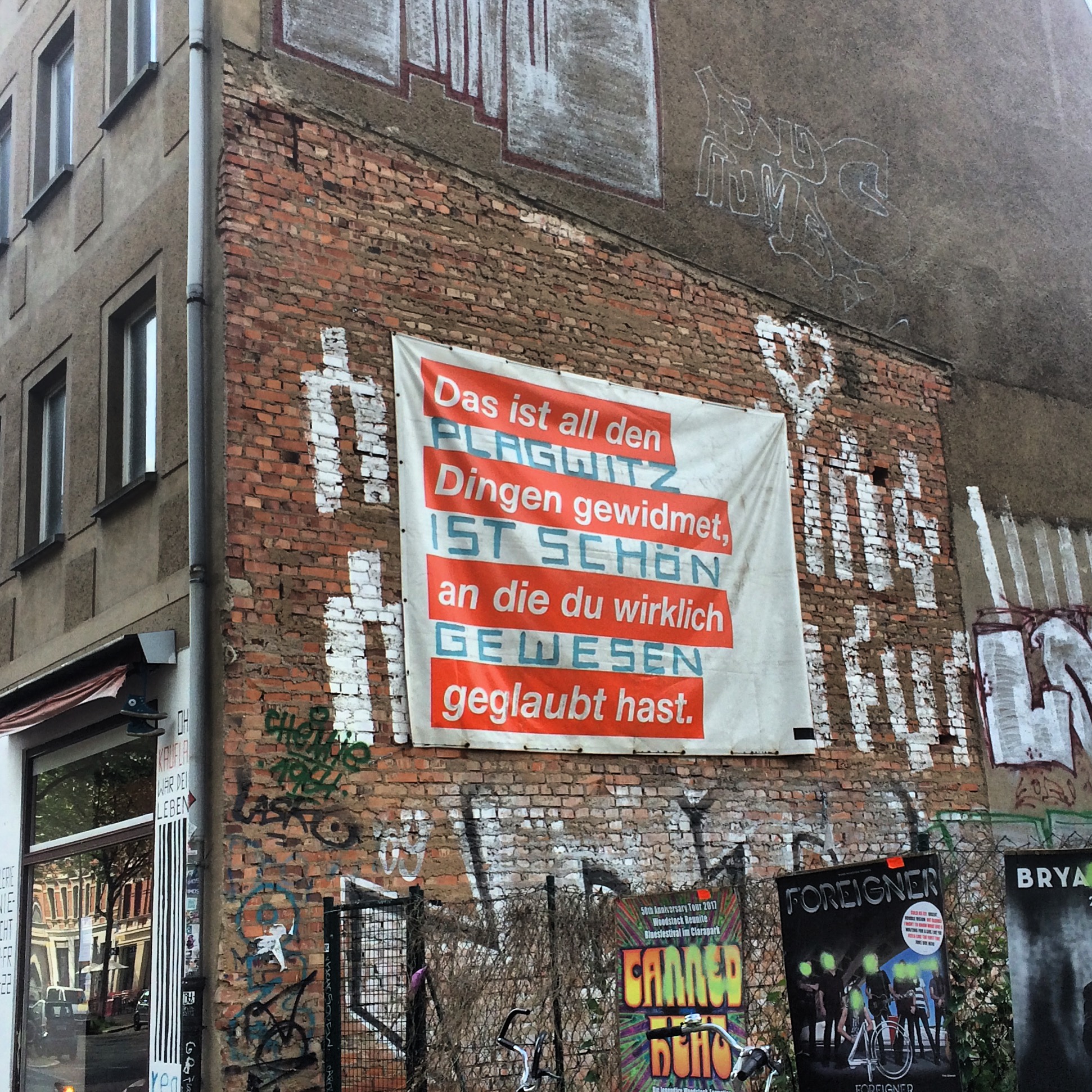 I rarely leave Berlin. There’s enough to do, enough to see. It gets worse when the sun comes out, when parks, canals, and lakes issue a siren call Berliners can’t resist. So when a friend invited me to go to Leipzig on Himmelfahrt (see: public holiday), I immediately said yes. Leipzig is cool, they say, and it’s only two hours away by bus for a mere 20 euros, roundtrip.

We arrived in Leipzig shortly before noon, knowing we only had seven hours to “explore” the city. Yes, yes, I know. Silly Berliners. Seven hours to explore Saxon’s largest city, Germany’s tenth largest by population, the old digs of Bach, Goethe, and Rammstein’s frontman. The silver lining is that Leipzig has a compact city center. Main sights like the Thomaskirche (where Bach is buried), Altes Rathaus, Nikolaikirche (where Bach worked as music director), the Goethe Memorial, and a sprinkling of thought-provoking statues and street art are all within short walking distance, which we translated at the time to “Oh, Leipzig’s got a cute, small city vibe.”

The whole hour of sightseeing took a toll on our growling bellies. With Yelp’s help, we navigated Leipzig’s touristy center to find reasonably priced German food, a search that led us to Zur Pleißenburg, a German restaurant rated four-star with a one-euro sign. I was craving Schnitzel so bad, along with it Bratkartoffeln and a creamy sauce for dipping. I believed in Zur Pleißenburg, or so I did when I spotted Schnitzel nach Jägerart on the menu and when the waitress served my meal, because boy did it look promising:

What you don’t see in this #foodporn worthy photo is the struggle that went into slicing the industrial pork cutlet. The featured Schnitzel seemed to have spent an eternity in the freezer and a nanosecond on a pan, which was confirmed as I rejected one uncooked bite after another. The mushrooms were creamy, but they definitely came from a can. Potatoes could almost always rescue any meal, but these did not. My point is, I should have known better. I fell for the price/quality trap and went for the one-euro sign. If you can afford a little more, please don’t make the same mistake and look elsewhere.

After lunch, we certainly had enough of the touristy BS. I think my friend even literally asked, “Where is the Kreuzberg?” And so the search began. Type “cool district Leipzig” on Google and Plagwitz will certainly come up, the district that’s been at the center of “Hypezig”, Leipzig’s road to becoming “The New Berlin”. So what do we do in Leipzig? We look for Berlin.

The road to Plagwitz was scenic: we walked through parks, admired regal-looking real estate, people-watched from a bridge and jealously eyed twenty-somethings on kayaks. After a 30-minute walk from the city center, we arrived at a thriving intersection where the vibe visibly escalates to hipster. We spot a warehouse advertising a Sneaker-Messe. We hear electro beats coming from a beer garden. And wait, what’s that shop at the corner… Vöner? Vegan Döner? (Yes, it’s real.) Needless to say, we found what “we were looking for”. We spent the rest of our time in Plagwitz – the whopping three hours remaining – first at said beer garden, then later up and down Plagwitz’s main artery, a street lined with diverse restaurants (Tacoholics is a catchy, relatable example), cafés, shops, and street art that captures the district’s Zeitgeist:

In Plagwitz we ate ice cream, bought hot dogs, FOUND A SPÄTI, crossed another bridge, eyed restaurant menus, and felt at home. But I realized that I had been acting like a spoiled, ignorant Berliner all along, by not only searching but celebrating each sign of familiarity in an unfamiliar place, when the point was to experience something new.

I’ve come across very interesting information while writing this piece. The fall of the Berlin Wall started in Leipzig. Europe’s oldest surviving coffee house is in Leipzig. Europe’s largest train station by floor area is in Leipzig. All of which I didn’t visit or learn about while there. So while I rarely leave Berlin, I will do so again sometime soon. This time, to look for Leipzig.