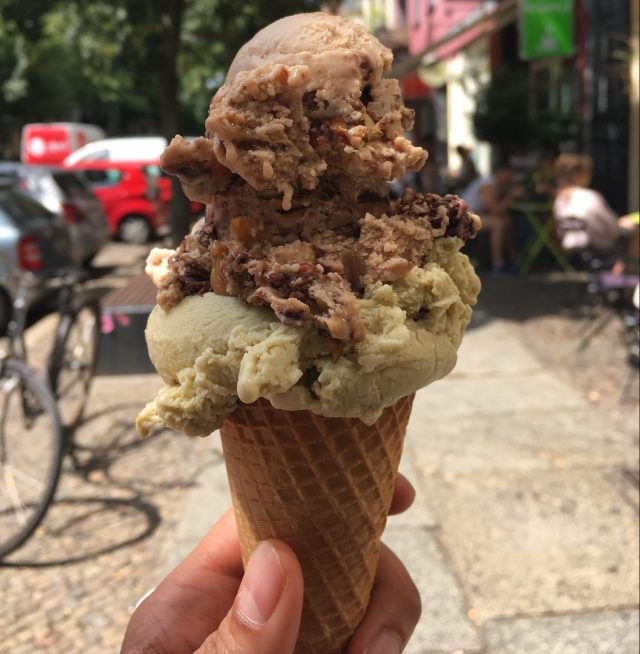 Berlin Ice Cream Week is a reminder that this city has many, many scoops to choose from, and that I’ve been slacking.

It’s not a breakup, Hokey Pokey, just a break

Of the 25 participating ice cream shops, I’ve only been to eight. Why? Because I’ve been returning to Hokey Pokey – deemed by many as the best ice cream in Berlin – and these other favorite places, where I know I could always get a creamy, crystal-less scoop. If Hokey Pokey were the local Ben & Jerry’s, Early Bird would be Häagen-Dazs. They don’t get as wacky with flavors and mix-ins, but rather keep their flavors simple yet explosive. Their Caffe del Professore and pistachio gelato have kept me coming back for a year. Speaking of wacky, fancy a scoop of ube or pandan? These ice cream flavors always bring back childhood memories of buying them in gallons from the supermarket or by the scoop from a street cart.

Sure, they might sound a little weird, but don’t let that put you off. Take it from the kids who first fell for their catchy bright colors, but now keep coming back for the taste. Move over, Schlumpfeis! When Anna Durkes closed in 2018, I reverted to Fräulein Frost three blocks away for my ice cream fix in the Kiez. But it was not the same. When Lecko Mio took Anna Durkes’ place, the neighbors thought the same.

It’s not that the neighbors are wrong – they’re just different. Lecko Mio’s pistachio, peanut, walnut, and cheesecake scoops have been my go-tos, and if you’re feeling indulgent, their homemade waffle cone (featured above) will not disappoint.

Tip: It’s also not far from this good sushi spot in the neighborhood. After a hike on the Wuhletal-Wanderweg, I decided to reward myself with ice cream, which led me to Da Dalt in Köpenick. I ended up eating five scoops that afternoon – little did I know I could’ve gotten them all in one cone.

Da Dalt not only offers Waffel-Muscheln, a trend from the DDR days, but cones in unusually large sizes. The lady in front of me ordered five scoops in one cone, which is apparently just the right amount for the walk to S-Bahn Köpenick.

Cones aside, Da Dalt’s gelato was memorably creamy, and their extensive flavor selection – which struck me as half standard fare, half experimental – won’t leave anyone empty-handed. When a cone is not enough, enter Tupperware

I don’t often find myself in Weißensee, but when I do – and Eisspatz is open – I make the obligatory stop. Their chocolate and pistachio scoops are some of the richest and creamiest I’ve had in the city. My most recent discovery (thanks, S!) has led to the quirkiest scoops I’ve had this summer: sweet potato and mate. But the real winner so far has been their coffee flavor – get it schokiert (with chocolate chunks) if you can.

Where have you had the best ice cream in Berlin? Let me know. Please.