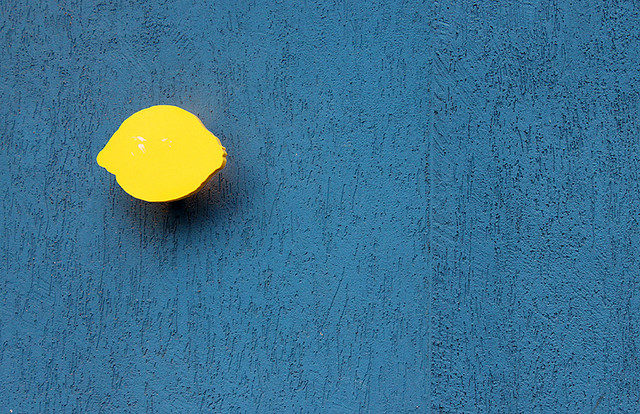 Last Sunday I had my first brunch experience in Berlin, which is sad since I’ve been here for a year and a half.  For months I’ve been hearing rave reviews left and right, mostly from coworkers who were clearly earning more than me. From “that awesome Russian place in P-Berg” to “that nice café on Simon Dach”, all I could do was note these recommendations so that I could eventually try them myself. Did my first Berlin brunch take place in one of these personally-recommended, highly-regarded establishments? Nope. I live in Neukölln, and on that wintry, on-the-verge-of-snowy January Sunday, a trek of more than fifteen minutes was out of the question. Enter Zitrone, a restaurant in the Graefekiez that was only five stops away on the M41.

Zitrone is a bit of a mutt. The restaurant’s website describes its cuisine as Mediterranean in the summer and North-European in the winter, with year-round Asian, African and Latin American influences. Sunday brunch is where all these cuisines meet – a culinary metaphor of sorts – which at 9€ per person is quite a steal.

Starting with a basketful of warm rolls, hungry brunchers follow an array of Mediterranean cheeses and scrumptious dips, interjected by the plateful of champignons, grilled eggplant, spring rolls, and savory crêpe slices, to name a few. Then it takes a sharp turn (literally too) especially for the carnivores, with a meat selection that includes roast beef, ham, turkey, meatballs, sausages, as well as a few quirks like fried chicken. At the end, your plate ends up looking like a colorful canvas.

It’s a brunch buffet, so feel free to “paint” as much as you like, but do save some room for dessert. Unlike most brunch places I’ve tried, Zitrone actually delivers in the dessert category, and deserves extra points for whipping up the best pudding I’ve ever had (I’m still not sure what it really was). If pudding’s not your cup of tea, you can treat yourself to some pastries and fruit slices. Speaking of tea, drinks are not included, which is quite standard for Berlin.

A tiny, negative-though-quickly-overlooked observation was that Zitrone’s brunch selection didn’t include any egg dishes (I’m normally a scrambled eggs kind of gal), so if your brand of brunch involves an omelette counter and a waffle maker, then Zitrone isn’t for you.  But if you’ve got an open palate and massive hunger pangs, then you should totally check out “that place at the corner of Graefestrasse and Dieffenbachstrasse”.

Tip: Reserve a table. We arrived close to 1PM and scored the only free table.