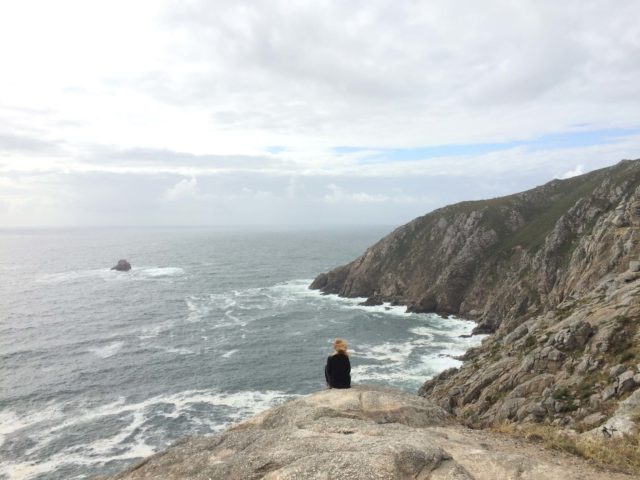 Costa da Morte was the fourth stop on our Iberian roadtrip, which started in Braga, then took us to Peneda Geres and then A Coruña, where we were forced to spend a night instead of camping because of a thunderstorm that never arrived (thanks a lot, Weather app). Galicia has so much to offer and we only had seven days, so we chose Costa da Morte over the tourist-favored Santiago de Compostela and drove our little Toyota Yaris westward, from A Coruña to the wild unknown.

California’s got the Death Valley, Galicia’s got the Death Coast: tens of kilometers of the rough Atlantic crashing into ancient rocks and colossal cliffs. Despite the violent imagery, quaint villages dot the coast. Sadly, time wasn’t on our side and we couldn’t visit them all in a day (we needed to pitch a tent before sunset), so we squeezed in two destinations based on local recommendations – Muxia and Finisterre – and they did not disappoint.

Muxia is an easy hour and a half drive from A Coruña, the final stretch of which gets hilly but eventually flattens out to reveal a relatively calm coastline, which at first glance was definitely not Death Coast material.

A passionate local was manning the tourism office that day and we learned a great deal from her: where to eat, what the local industry is (eel drying), and notably, what unfortunate events struck Muxia in recent years, namely the Prestige incident and the 2013 fire (caused by lightning) that destroyed the local church, which ironically happened on Christmas Day.

The pearl of the Muxia coastline is Santuario da Virxe da Barca, the very church that was destroyed in 2013. Simply looking at it, one would never be able to discern its charred past, a testament to the local efforts that went into restoring the beloved church.

While the church definitely caught our eye, it was the Atlantic that captivated us for hours: its waves mesmerizing, and its sounds oddly comforting. Right in front of the church you’ll also find an unmissable slanted flat rock. Crawl under it seven times and local legend has it you’ll be back pain free – for life! It was one heck of a workout to crawl under it once, so needless to say, we’ll take the back pain. Finisterre was visibly more touristy, unlike Muxia. As we would find out later on, Finisterre marks Kilometer Zero of the famous Camino, so some overachieving pilgrims choose to end their arduous journey here instead of Santiago de Compostela. We had an ordeal ourselves: extreme hunger. Disappointed by the restaurants and menus that read TOURIST TRAP, we sought a place where we spotted a few locals (or so we thought), a restaurant called El Galeón. When in Spain, it’s quite common to spot a menú del día, a fixed price menu of the day. It was no different at El Galeón, where one could get a daily menu that includes a starter, a ración, and a drink for 10 EUR. Total steal.

And of course, when in Galicia, you order pulpo gallego. Men could seriously write odes, symphonies, and poems about pulpo gallego, but for now, all I’ve got is a tribute on Instagram. As I write this post my stomach grumbles, my mouth salivates, and my mind asks: why am in Germany? Anyway…

With our bellies full, we headed to Cape Finisterre – the real Kilometer Zero, the real end of the earth. The name Finisterre comes from Latin for “land’s end”, and in Roman times, it was really the end of the world as they knew it.

These days, the first scene that will greet you at Cape Finisterre is that of the lighthouse. And then that things of left behind: shirts tied to poles, shoes hanging off poles. It’s because there are a few Camino traditions that surround reaching Kilometer Zero, the most prominent of which is to burn one’s shoes. Not the grandest of ideas: not only does it pollute, but also tarnishes the otherwise amazing views of the choppy Atlantic. Silly Camino people – can’t you read the signs?! What I loved most about Cape Finisterre was the romantic notion of standing at the edge of the earth. I wondered what early civilizations imagined existed beyond the horizon as they stood at the same spot. Or maybe they didn’t imagine at all.

Cape Finisterre might not be the end of the earth, not even of Europe. But standing there, it felt like it anyway. Have you driven along Costa da Morte? Tell us your favorite spots!