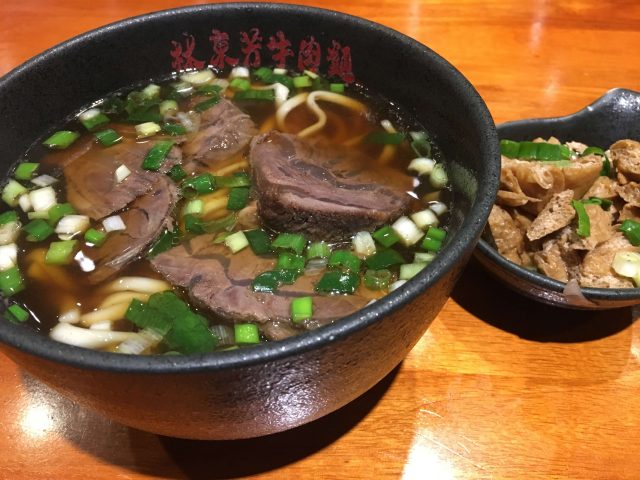 The long journey from Berlin to Taipei knocked me out. Ten hours of slumber later, the clock read 3 p.m. and the first question that came to mind was, “Where should I get beef noodle soup?”

This image was taken right after going through immigration. The priming worked.

Many Google searches later, I settled on Lin Don Fang: a long-time favorite among bloggers and a recent discovery by Michelin food inspectors, who awarded the noodle soup joint a Bib Gourmand in 2018.

Earlier blog posts described it as a hole-in-the-wall so I walked right past it. Today, Lin Don Fang is a two-storey restaurant whose sleek interior, modern kitchen, and English-translated menus are a far cry from what it once was. Lin Don Fang, all grown up No Mandarin? No problem.

I went for the large beef noodle soup (200 NT/6 EUR) and their signature side hua gan, tofu cooked in beef stock. I intend to eat more bowls of beef noodle soup on this trip, but this inaugural bowl set the bar high with its light but flavorful broth, chewy noodles, and tender chunks of beef.

With a happy belly, I left Lin Don Fang set on visiting my first night market. Shilin and Raohe dominate recommendations, but I chose Tonghua Night Market which was a 40-minute (digestive) walk away.

Of course they sell other stuff too, but you visit a night market to eat. After walking the four-block length of the market, I settled for purple rice milk (50 NT/1.50 EUR), a blended mix of steamed purple rice and milk, resulting in a drink that’s reminiscent of taro bubble tea but with rice goops instead of tapioca balls. I chose to drink it warm, but you can also get it cold. I look for the queues whenever I’m indecisive about what to eat, and there was one stall selling egg-based fried balls (20 NT/0.60 EUR) that I just had to try. Still not sure what I ate, but it was tasty. These two snacks took a toll so I embarked on digestive walk #2, this time to catch a break while sipping on Taiwan’s favorite drink.

Who knows if they really invented bubble tea, but Chun Shui Tang – located in a mall in modern Xinyi – is certainly a local favorite.

To soothe an ongoing cold, I went for their warm original pearl milk tea but the cold version is, of course, what’s standard here. If you don’t have a sweet tooth, you can even tone the sugar down to 50%, 30%, or none at all. There was still boba on the bottom

The juxtaposition from my table’s perspective was strange – cultural tea house on the left, leather bags on sale on the right – but location doesn’t matter when the food and/or beverage is done right.

MRT | Hold on to your tokens

Still spoiled by the break from walking at Chun Shui Tang, I decided to indulge by taking the MRT, Taipei’s subway system. Everything was orderly and efficient – which, as I’m learning quickly, is the usual – but with one cool oddity: they use tokens instead of tickets! Color me silly, but I’ve never come across it. Thanks to a colleague’s recommendation, I ended up at a hostel in a vibrant part of town. It’s peppered with so many shops, restaurants, and snack stalls, so I was delightfully surprised to see the local fruit stand rubbing shoulders with his grease-requiring, pot-boiling counterparts. It was already 9 p.m. and yet he had a queue! Long live the fruit stand! So many fruits, so little time

With all the sodium coursing through my veins, I figured I could use half a pineapple (100 NT/3 EUR) which the guy handily sliced for me. Warning: half a pineapple is a lot, half of it now sits in the fridge.

I wish I could say the day ended on a sweet (pineapple-y) note, but like I said, I’m surrounded by snack stalls. Angel Fried Chicken is one of them.

Numerous blog posts have praised Hot-Star’s large fried chicken, so when I saw a similar-looking joint with a growing queue, I couldn’t resist but join. A mistake is also a lesson learned

Can you believe that this giant fried chicken cutlet (75 NT/2.20 EUR) cost less than half a pineapple? Of the things I tried on Day 1, this was definitely the most disappointing. The chicken was too sweet (cue the thought: “What was injected in it?”), it wasn’t crispy, not spicy enough. I figured it was karma for being too eye-hungry.

So there we have it, a very protein- and carb-filled Day 1. Plan for Day 2: eat mustard greens.