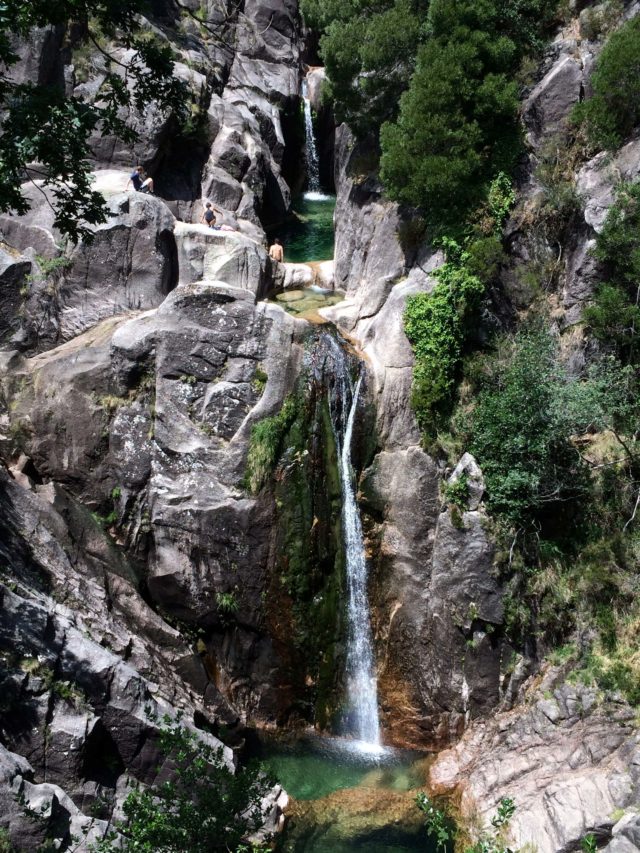 We had two things in mind before landing in Portugal: camping and hiking. With no set plans, a Toyota Yaris rental car, and a good ol’ Lonely Planet guide, we narrowed our destination down to Peneda Geres, Portugal’s first and only national park.*

Peneda Geres is enormous, occupying some 72,000 hectares northeast of Portugal, and boasts impressive sceneries, from Roman trails to multilayered waterfalls to Stonehenge-like formations – Lonely Planet devotes ten pages to cover the park alone! The saddest part was that we only had two days to spend there before heading to Galicia, so there was no way to see it all.

Thanks to Ermida Geres Camping‘s rave reviews, we chose Ermida as our base camp, filled up our tank, Google-mapped the campsite, and headed straight there from Braga. (Okay, with two stops: We picked up a tent and hiking shoes at Decathlon and groceries at a Portuguese supermarket chain called Continente, whose wine section is amazing.)

Peneda Geres is only a mere 48 kilometers from Braga, but the drive can easily take more than an hour. Once you cross the Cavado River, prepare to gain altitude as you navigate curvy, narrow mountain roads. We arrived at Ermida Geres Camping on a Sunday evening, thankfully with enough time to pitch the brand new tent before sunset. We then decided to explore the village to take advantage of the fleeting daylight, a trek that lasted half an hour, enough to confirm that Ermida is tiny. There’s a church, a restaurant, a lookout, a tourism office whose opening hours the locals don’t even know, and countless espiguieros, stilted stone outhouses which we thought were used to keep animals, but are actually used to store corn. Life in Ermida is as traditional as it can get. Carlos and Guigui, the jolly owners of Ermida Geres Camping, told us that every day, a goatherd picks up the villagers’ goats – some 600 of them – and walks them up the mountain, a stressful affair made possible with the help of herding dogs. Then there’s the transhumance, which we couldn’t find a translation for (looks like it’s just transhumance in English) but we understood at the time as a sort of cow holiday rotational program. It’s the seasonal movement of livestock to high mountain pastures in the summertime and to the lowlands in the wintertime, which means villagers in Ermida will soon send their cows up the mountains to hop from one village to another, one pasture to another, only to return home in the wintertime. See: Not a bad deal.

The PR 14 is the 13-kilometer hiking trail that starts and ends in Ermida. After absorbing Carlos’ instructions and taking pictures of his hand-drawn maps, we set out for the mountains, our eyes on Cascata do Arado, the local waterfall and trail highlight.

The approach to Cascata do Arado was a tad disappointing. After an hour of walking through lush forests, we descended upon a dusty paved road lined with parked cars and no waterfall in sight, just rocks. I thought maybe the waterfall had dried up, but Carlos recommended to climb up the stairs to get the full picture, so we did.

Turns out, Cascata do Arado is a shy one and just takes some time (trekking across rocks) to get to. After enjoying the views and sounds of the waterfall, we carried on with the remaining ten-or-so kilometer hike and along the way saw impressive Stone Age rock formations: We joked with Carlos and Guigui about bumping into the goatherd on our hike. Guess what? To say that the whole operation was impressive is an understatement. 600 goats, four dogs, one goatherd. I was amazed. Just as I thought the last goat had finally been barked to motion by the herding dog, another goat troop would arrive. Needless to say, the goatherd and the dogs were not amused – but we were.

I was still on a goatherding high as we continued the hike, but the hours of walking started to get to us, especially under the intensifying sun. We walked faster, each step more eager to reach our next stop: a natural pool slightly off the trail. The approach was noticeably better than that to the waterfall – fewer cars, less people. Perhaps it gets busier in the summertime, but on this day, the Mountain Gods must’ve proclaimed “thou shall have a pool to thyself” because, yes, we had one to ourselves! The cold water was perfect for cooling off our sweaty bodies and the bottle of vinho verde we brought. Prime time for a little snack! It only took us an hour and a half from this point to reach Ermida, which we managed way before sunset. That left us enough time to hit up Casa Baranda, the village’s only restaurant, to celebrate the only way we know how: with a proper meal (and drinks).

Upon the waitress’ suggestion, we only ordered one portion of veal with “punched potatoes” which she said could easily feed two. I normally question such warnings, but portions in Portugal had been quite large leading up to this point, so we complemented our “conservative” order with soup and various appetizers. The veal I had at Casa Baranda was hands down the best meal I had in Portugal. The steak, cooked to a perfect medium rare, seasoned simply but elegantly, melted in our mouths. Casa Baranda only serves meat from the area, so who knows, maybe we even met the calf earlier that day.

We went to bed tired but happy that night. The next day we woke up somewhat sad, as it was our last in Ermida and in Peneda Geres, but ahead of us was Galicia, another promising, unchartered territory. On our way out, we managed a few pitstops.

One last look at Ermida in the pouring rain: And a peek at the gem that is Peneda Geres, from the Miradouro da Pedra Bela: Have you been to Peneda Geres National Park or are you planning to go? Share your tips and thoughts in the comments – I cannot wait to go back.

*No, it’s not the only park in Portugal – there are 26 other natural parks, reserves, and protected areas – but Peneda Geres is the only one to be classified as a national park.