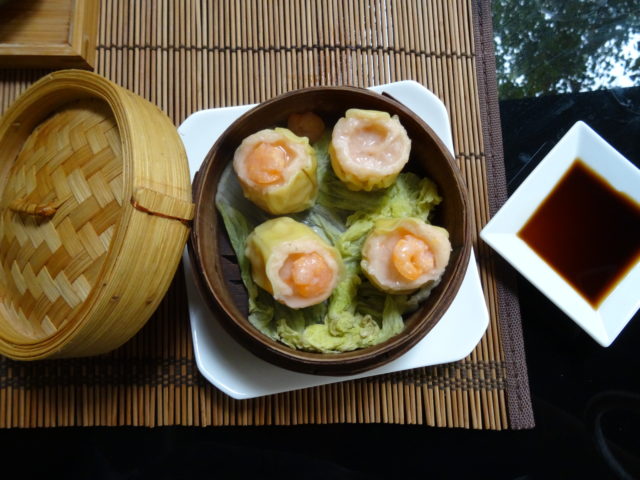 When I crave Chinese food in Berlin I usually go to Charlottenburg, where I can find my dim sum spot Aroma or Peking duck purveyor Good Friends. But sometimes Charlottenburg is just too far, especially when I’m hung over.

I wanted Chinese food from the moment I woke up today, and the nostalgia for huge-portioned, hangover-curing Chinese food from the States hit me. It was so bad that I considered getting food delivered to my apartment – at 2 pm – but thankfully Berlin doesn’t roll like that. I thought of potential nearby options and that’s when Tangs Kantine entered the picture, a Chinese restaurant in the heart of neighboring Graefekiez in Kreuzberg that I’ve always ignored, in favor of Kanstraße favorites.

We arrived at 4 pm (see: sluggish morning) and there were already four groups sitting outside, which I thought was a great sign for a rainy Sunday afternoon. I was starving at this point, so I was pleasantly surprised to find dim sum on their menu. It’s not a huge variety, but we were happy to see our favorites Tai Xio Bao and Xio Mai on the list.

Deciding on appetizers was a piece of cake, but choosing the main courses was tricky. I had a four-way tie between pork belly, grilled pork, double-baked beef and a curious dish called Donald Duck. In the end I chose Donald, which the waitress explained is their rendition of Peking duck. Did she just say Peking duck?! Sign. Me. Up.

Perhaps it was busy for a Sunday afternoon or they were understaffed, but service was noticeably slow. Half an hour later, the dim sum arrived. The Xio Bao’s warm rice dough and sweet-salty pork filling tickled our appetites; the Xia Mai, not so much. Sadly there were only two Xio Baos, which made us wish we ordered another serving of it instead of the Xia Mai. Regardless we scarfed them in record speed, and waiting ensued.

Our main dishes arrived ten minutes later, and I felt relieved that Tangs Kantine serves large portions. On my plate was literally half a duck on a bed of Chinese cabbage, with a soy sauce concoction on the side. My friend who ordered a garlic chili shrimp dish was actually served enough shrimp and not just a pile of vegetables. Another good thing: Tangs Kantine does not skimp on rice (looking at you, Arirang). Quantity: check. But how about quality? Answer: Tangs Kantine knows duck. The meat was super juicy and tender, the skin crispy and sweet, both of which went harmoniously with the special sauce and warm jasmine rice. We were highly satisfied with our meals, and at the end were left arguing about the difference between satt and voll. Could we have been both?

At roughly 8 – 13 EUR per dish, Tangs Kantine is pricier than your average lunch and dinner joint. But good, authentic Chinese food in Berlin – which is what you’ll find here – normally falls within this price range. For the price you pay at Tangs Kantine, you get quality, quantity and admittedly not so much variety – but that isn’t necessarily a bad thing. It hasn’t overthrown any of my go-tos in Charlottenburg, but knowing that I have this option a five-minute walk away makes me one very happy camper.