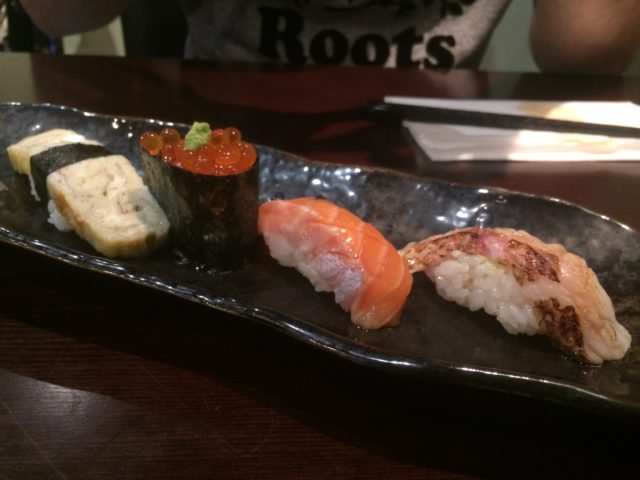 In Japanese, omakase literally means “‘respectfully leaving another to decide what is best”. And when you’re at Tetsu Sushi Bar, a popular joint in Vancouver’s West End, this is the only way to do it.

Vancouver is meant to have an amazing sushi scene, where meals are defined by tuna fattiness and not by spicy mayo overdose. Sadly we experienced the latter in an appetite-killing dinner the night before, and simply couldn’t let Inferior-Restaurant-on-Davie-Street ruin Vancouver’s sushi reputation for us.

Our search for fatty fish led us to a lucky last-minute reservation at Tetsu Sushi Bar. Countless blog posts have already been devoted to the hole-in-the-wall turned prime sushi spot, yet here I am writing another one. Why? Because, omakase.

Before watching Jiro Dreams of Sushi, I didn’t understand why anyone would ever go for nigiri when it doesn’t offer the same bang for your buck as a maki roll. But Jiro taught me two very important things: 1. It’s all about the fish, and 2. I’ve been eating bad sushi my whole life. I was to undo all of that at Tetsu.

We arrived early and had time to scan their whiteboard menu, which listed many fish names I didn’t recognize. Tetsu orders fish weekly from the famous Tsukiji Fish Market, and at this point, I was drool-ready for a taste of Tokyo. On a mission to eat real sushi, the four-course premium choice omakase menu was really the only option. The appetizers that came with the menu were interesting. Like the squid appetizer that exploded in our mouths: And the slippery and slimy yamaimo (Japanese mountain yam) puree:

One appetizer was memorable only because it was unremarkable: salmon teriyaki. Before Tetsu, we considered eggs as a breakfast staple and eel as a low-priority fish. Combine them and you get umaki a.k.a. the pairing of the gods, a sweet eel rolled omelette that was easily the best appetizer and left us wanting more (we eventually ordered a whole omelette).

But even the umaki paled in comparison to the headliner, the seven-piece sushi set that included two premium pieces: bluefin tuna kama-toro, the fattiest part of the gill flesh (top-left on plate), and uni, sea urchin flown straight from Hokkaido (far right). I wish I could remember all the fish names, but what I do remember is the mackerel’s surprising un-fishiness (bottom-middle), the cuttlefish’s exponentially-increasing creaminess as I chewed it (bottom-left), the uni‘s flan-like texture, and the kama-toro‘s melt-in-your-mouth effect that left me asking, why does it have to end here?

The problem with reaching sushi nirvana is you never want it to end. So we ordered a few more.

I particularly loved the slightly-grilled nodoguro or blackthroat seaperch (far right), the waitress’ personal recommendation. This fish is apparently rarely used in sushi: back in Japan she only ate it in stews; only in Vancouver did she try it in nigiri form!

Writing this post makes me want to crawl back to Tetsu, the absolute Vancouver sushi destination if you’re looking for fresh fish, unique dishes, or a memorable first omakase experience, prepared by humble folks who simply want to serve good food. It was an indulgent meal especially by Berlin standards, but it was worth every penny (and I won’t mind a repeat).